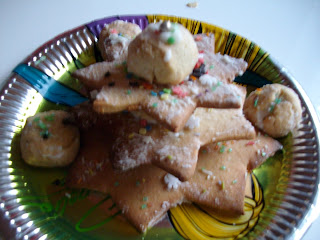 This Christmas biscuit recipe is something that I saw in an old magazine and I modified according to simpleness. After all, there are enough to do during this season, right?

What made this special is that the girls, who are in my private English lesson class at home, joined me in baking them. It was fun and it was another creative time for the kids, too. 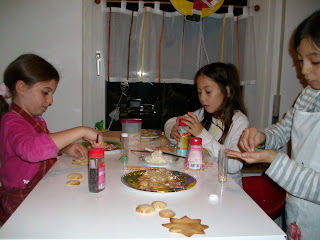 With mixer at low speed, beat eggs, butter, sugar, cinnamon, cloves, salt, almond extract, and 5 ½ cups flour. Increase speed to medium, while occasionally scraping the bowl. Mix in the remaining cups of flour, one cup at a time. Divide the dough, wrapping each piece with a plastic wrap and refrigerate for an hour or until dough is firm enough to roll.

Place the cut-out dough in a baking sheet and bake on a pre-heated oven to 200 degrees. Bake between 15-20 minutes, until light-browned on the edges. Let cool.

Afterwards, put the biggest star on a paper plate/aluminum folie-covered carton and starting with the biggest star, add the trimmings. Using the icing or frosting to keep them in place. In the middle of the star, glue one of the round patterns using the icing or frosting. Continue adding and trimming until a small tree is formed. Add additional trimmings.
Posted by raqgold at 23.12.11

I liked the christmas tree biscuit when i first saw it so i also made one for my niece 5 days before the 25th and my my friends saw it they were like kids amazed and wanting to try baking some so to make the story short we ended up giving x-mas tree biscuit as a gift to our friends anfd families....so cool!!!

hi henry, that's so cool! i still have some dough left in the freezer because the girls wanted to experiment with other forms. show us the photos of your goodies please!

My goodness, how your kids have grown! The one in the middle looks like you. :)