We have been waiting for her since March.

Okay, she's born last June 19, but we have already talked to the breeders as early as March. 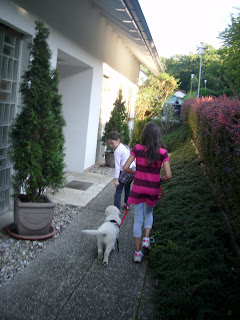 We visited Rikki a few times at the breeders, to familiarize ourselves with the pup and to learn more on care for Golden Retrievers (I have a long list!). IC, our seven-year-old still felt a bit threatened but she's not too panicky anymore. MC, our nine-year-old, moves comfortably around dogs though she hates being licked. 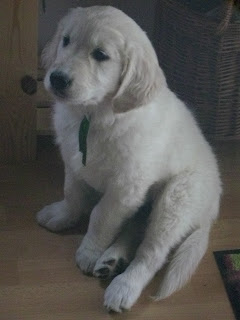 As a going-away gift, the breeders gave us a bag of wood chips (that would be her toilet), a bag of special dog food, and a small towel that smells of her first home to keep her from being homesick. After saying goodbye with tears and lots of photos taken -- Rikki is ready.

Yesterday we finished preparing our garden, created a pathway filled with wood chips/bark mulch and a small fenced in area for her 'toilet'. Now we just have to train her to walk those pathways and avoid using the stairs when going down so as not to strain her joints. Plus, we plan to buy her a mini pool as Golden Retrievers love water! 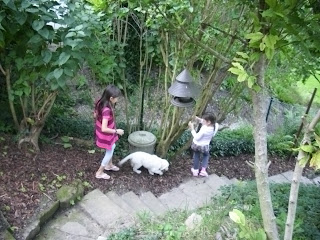 It is great having a pet again!

Oooohhhhh! I love you puppy, so cuteee! :D

we're planning someday (when we have settled down for good) to get a labrador as they too are good around children.

keep us updated on his development, and more pics pls :D

hi shielamarie, our first pup was a labrador/jap spiz mix and he was more kulit than the golden retriever.