I alread warned everyone at home, (everyone meaning the girls). If and when I do agree to have a dog, they would have to do most of the work.

It was only now that I realized, nobody (meaning the girls) vocally agreed. Guess who ended up doing all most of the work?

So my girls are seven and nine-year-old respectively -- yet I am now back to sleeping late and waking up early (sometimes even roaming around in the middle of the night); not to breastfeed my babes this time, but to play with the dog, walk the dog, keep the dog busy and everything in between.

Of course, I have set the rules.

The pup stays in the first floor where the living-dining area and the kitchen are. As soon as the pup's been trained, then the girls could bring them to their rooms in the second floor. But the third floor, where the masters bedroom and the home office is located would always be taboo.

The first two nights were okay. Both girls camped out in the living room and the garden to keep the pup company -- feeding, walking the pup, playing with the pup as needed. They even slept on the sofa those two nights. In fact they gladly assumed certain responsibilities.

IC became the 'snoot wiper' of Rikki because she hates it when the pup's nose is wet. She would even tell to Rikki 'blow your nose' and would always have a napkin ready :-D

My youngest also worries about Rikki's behind, everytime the pup is done pooping, she wants to know if we need to wipe the po clean!!!

As for MC, she's taken into cleaning Rikki's eyes from those sleep grits!!

Anyway, what about those rules? After the third day, Rikki's on the second floor, wanting to jump in bed with the girls (who are sharing a bed as it is vacation time). And on the fourth day, the pup's roaming around the third floor!! Who bended the rules? My husband, of course -- the softy! 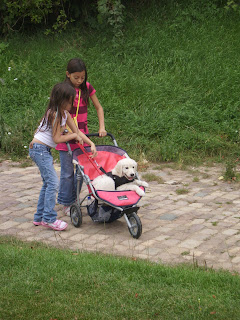 But still she's not allowed to use the stairs in going down, so as not to strain her joints. Even long walks are not allowed yet, good thing we still have a doll's twin stroller which Rikki is using now to rest. Or else we have to carry her and she's now almost nine kilos!!

Wow..COngratulations on the puppy! Yes, I had the same dilemmas you had when a labrador-retriever pup was given to us 6mos ago. I had to train her when and where to poop and pee so that she wouldn't do it in places we didn't want her poo or pee around.!

It is really fun to have a dog..so easy to get attached to them easily. My 3yr old daughter Zoe loves the dog so much already...:)