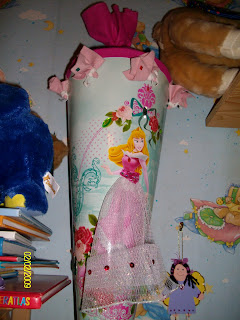 Vacation time is almost over. It's time to sort out what comes into the girls' school bags. And IC was asking if she would be getting another schultüte (school cone) for her first day in the second grade. Well, they might just get small gifts to add a little excitement to the day but the school cone is out.

This is MC's schultüte. A schultüte is a traditional first day of school gift bag to the first graders and mostly hand-crafted.

MC chose it and asked me to pep it up according to her instructions. I did but it was supposed to be a surprise so I teamed up with other moms. Instead of working on it with her.

She loved the surprise and she wanted to keep it forever. Afraid that it would be damaged if we just kept it leaning on the wall, she asked us to hang it. So there, a wall decor!

But we had to leave for the Philippines in 2008. We did pack her schultüte; packed it very carefully. Then in 2010, back to Germany. After surviving the container trip to Manila, the terrible flood, the three time house transfers, and the hundred times of being shown off to guests -- MC's schultüte is now tatterred, badly tattered.

The decision is: should we pack it or leave it in the Philippines?

MC tearfully gave her nod to leave it. On the condition that, she give it to someone else as a gift.

She gave her schultüte to a poor couple with a small baby girl leaving in the streets of Manila. And she gave it with a smile. 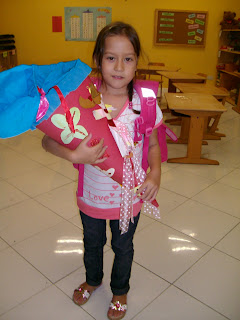 As for IC who celebrated her first day of school in the Philippines in 2010? She's already said goodbye to her schultüte earlier. She just made sure that there's no more gifts inside and threw it in the waste basket.

Well, to each his own!

This post is to preserve the memories of my girls' school cone!
Posted by raqgold at 12.9.11

Bumalik na pala kayo ulit dyan. Musta na sis? It's been a while.