I am not really a winter sports fan, well am not also a summer sports fun. But I am a vacation aficionado ;D

So despite knowing that we'd be walking like robots with our thick winter gear for this winter weekend, I'm really excited. First because it's still a weekend away from home. Second because I am liking sledding and I've big hopes I'd soon fall in love with skiing or even snowboarding!

Drove early afternoon. Kids were excited. Parents, too. Should have been there after 2 and a half hours; but we got lost three times! In the end I was joining the girls asking the Papa, 'are we there now?' There was even a short scare because although we were driving up in the mountains, we couldnt see any snow! We thought it would also be green up where we booked our hotel. 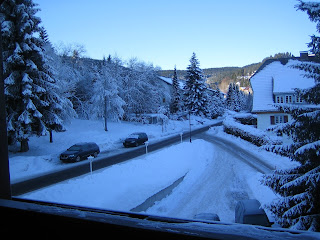 We were driving to Feldberg, Hochschwarzwald (Black Forest) where we booked at Hotel Waldeck.

We reached our destination and were very glad that it's white up there! Look at the snow covered streets. This photo is taken from our hotel room's balcony. 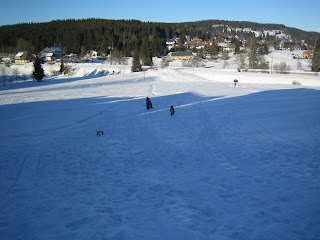 And here is the back area of the hotel which became a private sled area for the kids. See them flying on their sleds? They got tired after a few minutes as they had to pull their own sleds alone, though. So I showed them a very good solution: use their bottoms as sleds! And we all did :D 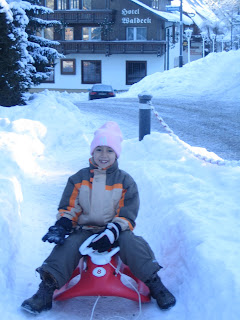 Just right in front of our hotel. The kids need not walk as the snow on the streets are good for their sleds. 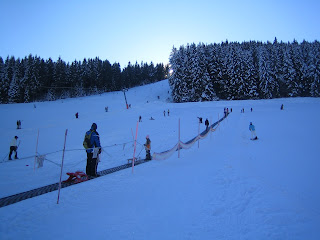 What made the kids really happy, and us parents, too was really this magic carpet. A ski/snowboard/sled lift. It is only in Feldberg that they have this kind of thing. Meaning, no real effort needed to pull the kids up. What a relief :D 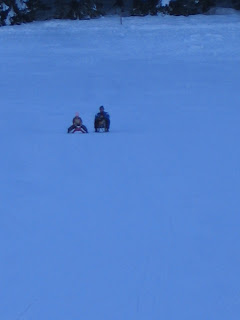 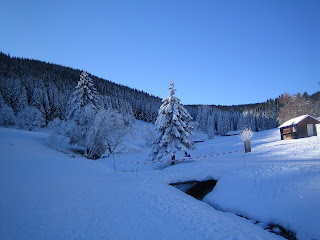 The resort area was not so crowded. There are enough area to move around and get sledding crazy. Which we did! I played a game with the girls called 'catch the sled' in which I pulled the sled around and they would try to catch and sit on it. Well, that game was more tiring than sledding, let me tell you. 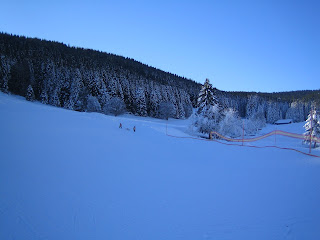 After a few tries on the slope, the kids wanted to try another slope alone. Well, we let them. And do you see them up there? Getting ready to barge on us.

This time I did enjoy the sled rides. MC got irritated with me as I didnt want to slow down and she wanted me, too. Hahaha.

Plus, I got interested with skiing, too. I watched a group of beginners and tagged along with them, that was, as long as I could get near them and hear what's being said. I learned a few tips and I am ready to break the ice! Let's see if that spark of interest wont die down on our real winter vacation this coming February :D
Posted by raqgold at 20.1.09

oh wow, winter wonderland - the girls must have been very happy ;)

postcard-pretty pictures! I would've to try the skiing too.

It's nice to have snow from time to time no! We get also to enjoy it even for a short time ;) ! Do you ski??

I live in California, and have never bhee`n skiing. Last year I came back to my home in Redding to nsee the snow falling for the second time in my life.

I suppose with good warm clothes it could be fun....

marites - snow would alwasy be a wonder to me

haze - unfortunately, i dont ski but next winter vacation i plan to have a private instructor, am eager to learn!

ketih - hey keith, how could you :D experiencing snow two times in your life only? well, i didnt think i would experience snow coming from the islands that's why am enjoying it.

My next trip is back to the islands, because I have man y friends there. I lobve the Philippines, and have plans also on visiting Indonesia.

I would love to visit Alimanya, but that would cost much more than my curren t budget.

Snow is fine, but I love th tropics more.

hi keith - you know what, i would rather be in the tropics, too :D but in our part of germany, we have a very mild winter so we dont get a lot of snow.