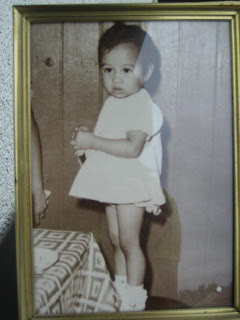 Photo: The two year old me.

I've been tagged by auee. I am supposed to share 8 random facts about me. Since I have done that tag, I am glad she gave it a new twist by preferring to talk about the past. I'd rather focus my reminiscing on something that I really miss, the house where I was born. Here goes:

1. We used to live in a real bahay kubo (nipa hut) since I was born until the early 90s. I dont know if I have a photo of our bahay kubo back home; but let me try to describe it to you. It is a sprawling house with a backyard garden that was filled with fruits trees like santol, guava, Indian mango, starapple, banana; we also have flowering trees, plants and flowers; a small canal flows through it that was abundant with kangkong. Then if you dig through the soil, you'll find camote and potatoes, too. There was an old well that we kids were always in awe of, we dont really know how deep it was.

2. I still remember that we have a bathroom that was separated from the house. It only has for thin walls, and an aluminum door. You need to bring your pail full of water if you want to take a bath! Our kitchen and the dining table were located on the ground floor; where there was a short cut going thru my cousin's place. So that we have no privacy when we eat -- there were always people coming and going. And the cats were always everywhere. And, there was no flooring in our ground floor what so ever; pure soil. Sometimes when it floods, we get to eat on the second floor. But my grandma would have to cook in the kitchen, wearing her rubber boots.

3. In the kitchen, we used a stone oven. My grandma needed a small aluminum tubing to blow and ignite the coal to start cooking! We have a big aparador (closet) where we put the basic things needed for cooking. It was only in the late 70s that we got a ref. We have a big banga (a clay pot) which was always full of water near the sink area to be used for washing dishes. Near the banga was the tap and a place to wash clothes. It was always wet on that side of the kitchen!

4. It was in the late 80s than we got our own tv. We won it on a tombola, it was the first prize! My father refused to buy use a set because he thought tv would take away our interest in studying. The 'new' black and white' tv set could only be turned on during weekends, though.

5. Our big backyard was our playground. We have swings made of sack and ropes which we tied in one of the sturdy branches of our starapple tree. Our neighbors normally bring out their babies' cots in our backyard during noontime under the shades of the trees and be lulled to sleep by the fresh breeze. And during those times, we were not allowed to play in the backyard. Then we sneek into an old, dusty, dark storage to play the ouija board.

6. We have two banggerahan (small veranda) where we play bahay-bahayan (play house). The verandas were also where our clothes were hanged to dry during rainy season. Our verandahs were the favorite places for our taguan games. We used to jump out of our of our verandas and climb over, just for the kick of it; good thing nobody got hurt, hmmm.

7. We have no privacy! Our house has two big picture windows such that when you look in from the front living room window, you'll be able to see through the whole house and into the next big window.

8. We have no real locks! I used to feel insecure because most of my friends already have their own house keys and I dont have any to show off. My father used small medicine bottles and put them between our sliding windows at night. And the door? He used a big block of wood clamped from inside to protect our sliding door. What's amazing was, there was only one breaking-in attempt. The man run off with my grandpa's antique radio and no more. One of our neighbors saw that our window was open so he called for company and created chaos to frighten the man. It was a big victory party afterwards :-D

That more than a hundred year old nipa hut had to give way to an apartment compound in the mid 90s though. Oh well, those were the days! I dont know who to tag, but if you are willing to share, please let me know!
Posted by raqgold at 16.9.07

Wow. Those were the days. I grew up in a barong-barong, you grew up in bahay kubo. Now we're both in Europe, surrounded by bricks... life.

I enjoyed reading this! Brought back so many memories of my childhood, too. Simple living made our little dreams come true.

BTW, I used to fret about not having a proper key, too. And we also had a closet for our kitchen stuff & we called it "paminggalan". And I still believe my arms are these big due to the strain of "igib tubig" from the distant water pump and my legs are the size of troso due to "bunot"!
:-)

Thanks for doing this.

aaww.. i love this post. reminds me of the days when you can drink tap water and air was really clean and fresh. nai-imagine ko na yung bahay nyo, siguro your curtains were crocheted by your mom?

sana may pictures, para sobrang nostalgic. "i remember yesterday, the world was so young..."

Ako din, I was wishing for photos while reading this post! The world seemed so simple when we were kids.

Except for some details, it was like you were describing my maternal grandparents' house. But their's has a silong where we sit on a big buyan and where Tatang would dry some vegetables for planting. We get water from the well for bathing. A few meters is where the carabaos spend time on the ground which my grandfather throws water to be muddied. Thanks for sharing the memories.

auee, yup, paminggalan, we used to have that, too. and the pump, how can i forget that :D

lady ces, i am really going to look for those pictures and post them later. those were the days talaga...

christianne, simpler and better, i think.

teacherjulie, ayun, i forgot about the silong. oo, we have that, too. we used to sleep sa silong during nap times kasi may kama din dun...

Sige, i will try to get some pictures of the house that you were talking about, he, he