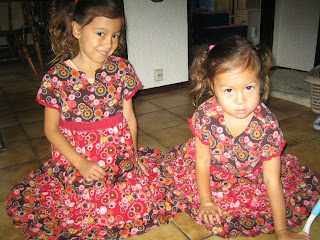 MC started her first day in kindergarten with a proud tilt of her head and a big smile.

She knows, she's now one of the big girls and boys in kindergarten, the pre-schoolers! Yes!

Actually, my husband was encouraging her to go to school this year; MC felt left out in kindergarten because most of her playmates were already pre-schoolers. Thus, they have a different program from her when they started last year.

But when I talked to the teachers in kindergarten about MC joining the pre-schoolers, they discouraged me. They told me that it is better to keep her for another year. Pre-schoolers should be at least 6 years old or would be six year old a month of two after entering the first grade. September is the start of the school year here. Since MC is born in December, it is clear that she must stay another year. Not because she wont be able to cope up academically, but due to the physical examination and calisthenics that all pre-schoolers would need to undergo. They said she would enjoy it better next year.

When told about this, she simply shrugged her shoulders. I guess, she just wanted to move on because her playmates are also moving on. The thing is, when a few of her former classmates in kindergarten came over to inform them of what they were doing in school; MC herself decided she wanted to stay in kindergarten. As she told me, 'mama, I dont want to go to school. They dont get to play there anymore, they now have homeworks!.' Oh well, she knows what she wants.

And we are looking forward, too. We would be having a school girl next year! Whew! How time flies!
Posted by raqgold at 11.9.07

I see that tilt in the head Raq. Ohhhh! your daughters are lovely! We both have kindergarteners! I hope your daughter will have lots of fun like mine. It's ok to have your younger one go in with the pre-schoolers. Mine did and I was glad that we didn't insist on putting her Kindergarten early because they are full day 9-3:30pm. How long is the Kindergarten there?

hi KK -- kindergartens here are flexible. you can choose your own sked. whole day, half day, or minsan naman M-F halfday but they have T-TH full day -- depends on what you'll be compatible with. where MC and IC are, they start at 7:30 am until 1 pm - tapos T-TH may afternoon sila from 2-4 naman. i dont usually bring them in the afternoon kasi andun yung skeds nila for extra curricular activities e.

The flexible sked is really nice. Preschool (including Kindergarten and Prep) here in the Philippines are up to 4 hours,even less. Glad to know your daughter is enjoying school.

Same thing happened with Gaby. I was insisting that she be moved up to Nursery from pre-Nursery but her teachers felt that age-wise, she wasn't ready. Plus, she would not be eligible for Grade 1 until she turns 6 so buti ng ulitin niya ang pre-nursery kesa prep.