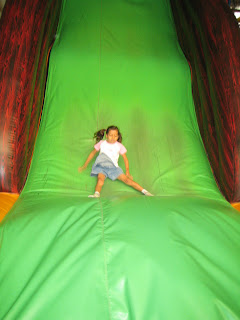 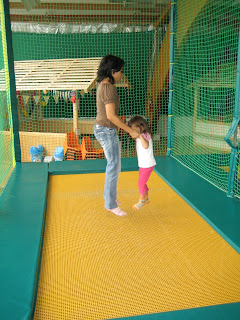 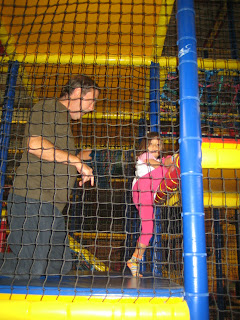 Every first Sunday of the month we celebrate our kid's day. Thus, we were off with the kids yesterday morning. Though papa planned for us to visit the air show in Weinheim, the kid's had to disappoint him. They both wanted to go to the Villa Kunterbunt.

It is kid's day, therefore, we go along with the kid's wishes. Papa's plan went pfft. This would be the second time that we are celebrating kid's day in the Villa. The first time was in winter, early this year. And though we've repeatedly visited this indoor amusement park in between, we've tried to avoid going there during summer. Instead, we steered the kids to outdoor pools or camping or anything where we'll get to stay outside. Fresh air is always good, right?

What amazed me is that I saw how the kids are developing their self confidence and independence. Upon paying the entrance fee, both kids got in, removed their shoes and run off to the play area, alone! The last time we were here, my husband and I were being dragged by the girls from left to right. From one activity center to another. Never wanting to be left alone, especially on the climbing frame and the giant slide.

The last time we were in the Villa, we had a hard time with MC on the slides. She wanted to repeatedly use the giant slide, but she just doesnt want to go alone. We should always be there, sliding with her. Which of course, is not to my approval, really. The very first time I tried the giant slide was during our first visit in the Villa and that was something I dont want to repeat anymore. I had to do it two more times, before I escaped with a headache.

And yesterday, she took off alone; simply screaming for me to watch her stunts. IC took sometime playing with papa; who had to endure molding his body within the narrow climbing frames. But after a few minutes, she let the papa go. She was running around with her sister all over the place.

I had my own fun, too. I discovered the trampolin! Whew, it was really something else. I tried doing the backflip, but not yet. And I thought I can do it within 15 minutes training, haha!

My husband and I were really so happy to be watching the kids enjoying their newly found confidence and independence. But of course, we would always be on our feet whenever we hear cries for mama or papa within the crowded play area!
Posted by raqgold at 3.9.07

Looks like a fun-filled family day. Independence is a sign that the kids are growing up fast.

wow! you guys really had fun! i wonder if there's something like that here in Malaysia. hmm... have to find out. i like the idea of kids' day.

rach -- yeah, we really had fun. and the kids enjoyed their 'independence', too!

janet -- you can start treating them to a kid's day, it's worth it!