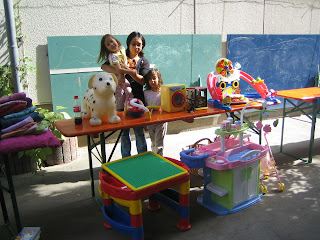 The kindergarten's parent's council held a flohmarkt (flea market) last Saturday. The theme: 'everything for kids'. My husband, though the president of the council, wasnt really enthusiastic about the idea. But then, he doesnt know how many tons of kid's things we moms have in our care, right? He doesnt really understand how urgent it is, the need to make space, because more new things are coming in :-D

Despite his reluctance, he helped out in the planning and preparation. He was even the one who chose our stall's location and even brought me small change for the day! Since this is my first time to be a flea market seller, I wasnt really awaiting something huge. I usually donate some of the kids' things and the rest I sell through eBay (I make good profit from them, too). But since I am having a dilemma about seeling big, bulky things via eBay, the postage cost alone would be too much; I've decided to bring them out to the flea market.

There we were -- around 25 stalls, selling used things. I heard that they had to cancel 10 would be sellers because of the limited space. Wow, I didnt know flea markets are really a thriving business. Because I also saw a lot of seemingly professional flea market sellers with their tons of boxes, their quick movements, their organized stalls. There were also moms with overloaded stalls. And there I was, sorrounded by 14 used toys.

Oh well, it's just for fun. Frankly speaking, I wanted to get ride of those bulky toys because we needed space! And a little money for the kids' bank account wont hurt. I baked some organic corn muffins to 'pay' for the stall. Oh, since the theme is for kids; there were also food stalls, face painting, art table, and the playgound to keep the kids busy.

Before the flea market formally opened, I already found a few pieces for the kids. My husband jokingly told me, 'you are supposed to bring in money, not to give them away.' Yeah, right :-D

As expected, the people who really wanted to buy something came a few minutes before opening time. They even have their own huge bags with them. In my own corner, I enjoyed watching the bargaining and the picking and the selling. I have posted prices on the toys so that there wont be too much questions (I am someone who hates asking for the price, I would rather see it and then decide from that or haggle if possible). Of course, if one really wanted to haggle with me, I am prepared to give them for their price. I am easy, hehe!

In the end, I had only three pieces left. Yohoo! I had to give discounts, but hey, the thing was, my stall was almost empty. The rest would be auctioned off via eBay. I went home happy.
Posted by raqgold at 17.9.07

Aba nice day ah
Did you have to do any sales pitch? And most importantly did you even out the balance between your newly-bought items and those you sold?
:-P
Baka mamaya negative ha

Raq, I would have loved to bein that flea market, that would be paradise for me. That should be a good idea!

You must have done a lot of things right to have the booth nearly empty when you left. Good for you!

auee, we simply wanted those used things removed from the storeroom :D yung profit was just an extra.

geri, i love flea markets, too!

daisy, well, those things were really faves of the kids plus i cleaned them thoroughly before bringing them out.