The Sea of the Senses 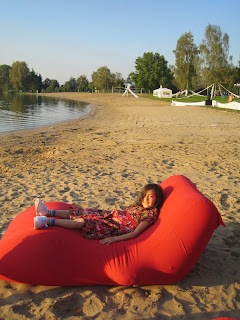 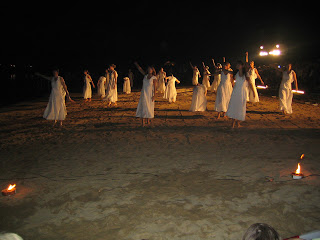 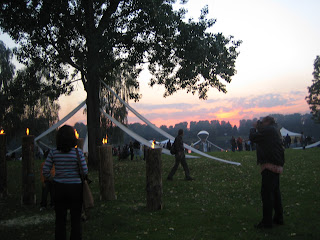 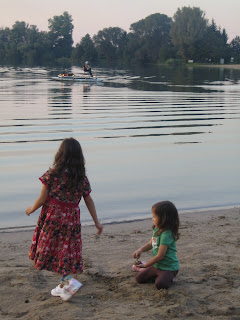 Photos: 1) MC lounging 2) the dance 2) Sin der Sinne 4) the kids loving the sand while the guitarist floats with his sound in the background

Our city celebrated the 'See der Sinne' (the Sea of the Senses) last Saturday. It was a real feast of the senses: the lights and the fascinating exhibits stimulated the eyes, the band music lulled with their sounds, the sea and the gourmet spectacle flavored the air, the great food and wine left their savory mark in our tongues; and the enthusiasts were seducted by the excitement in the air.
We decided to walk, the sea is only a 15 minute walk from our place. Since the there was no entrance fee, the place was already crowded before the intended opening at 6 p.m. It was already buzzing. The girls buzzed loudly, of course. They got busy testing the water, playing on the sand, stamping their feet in every opportunity as they have their new pair of shoes that blink. Thus, they became a part of the attraction when it got dark as their shoes simply lighten up the path!

Food was gourmet quality, thus, a disappointment for the kids. They wanted french fries or hotdogs! But since they have no choice, and they were hungry, they settled for ravioli and shared my fish soup. Oh, but we went back for more of those eclairs and those pralines, yum!!

The highlight of the day was MC, staying up late to party, for the first time! When we heard that a special dance would be performed on the beach, she decided she wanted to stay to watch it. And proceeded to practice some ballet dance steps. She said she wanted to dance, too. Her enjoyment tickled me so I nodded my approval, and was seconded by my husband. Although we have reservations about IC not being able to stay awake for the rest of the program, we stayed.

It was around 9 pm when the dance started. IC was already a bit irritable. But MC was on her elements. And to the dot, when the dancers started coming in; IC swayed sleepily on her perch on papa's shoulder. She missed the whole show. But MC proudly announced, 'I am still awake, mama.'

Well, the show was great. We had to alternately carry IC home though. And MC cant believe she's so grown up; she was allowed to stay up so late. And so she concluded, 'Wow, mama, if I can stay up so late; our tenants can invite me to their party next year already.' Aha, she's already got a party plan. (Our tenants are in their late 20's)
Posted by raqgold at 24.9.07

The 4th picture is really nice. Your daughter must be a pretty party girl.

That's a very interesting feast. What are the ladies in white dancing to?

It would be very interesting to see the food served in the feast :)

Your daughter is so funny! Growing up, indeed!

That's a very nice activity. Good that you're exposing your kids to both culture and history this early on :)

How enchanting! MC looked like she's got it made on that lounge. With matching gourmet food, wow! Kids nga naman give them gourmet they want the basic picnic food. :)

momoftwo, the dancers where dancing to a slow jazz tune. sorry, no food photo btw: they run out of food around 9 pm!!!! at the show was until 1 am, hehe

cookie, as promised, we'll be having playtime with our kids in 2008. wait ka lang :D

KK, was really funny. kids were asking for french fries all over the food stalls, hahaha.

auee, this was the first event of its kind in our sea here. muntik pa nga ma cancel coz it is dependent on the weather.