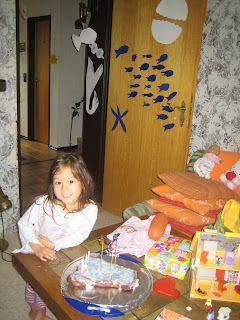 And then she is four. But before that --

- a month before, she refused to wear anything but a dress (even pajamas)
- two weeks before, she would only wear the Pippi boots (a pair of black boots three times too big for her feet) just because she still love Pippi Longstockings; and that is everyday (before that she would only wear her light blue shoes which she called 'church shoes'
- a few days before she destroyed all the artworks intended for her birthday party because she decided they look 'ikiiit' (yucky)
- a few days before starting enjoying riding on her roller and her laufrad (training bicycle)
- three days before she stubbornly closed her mouth; wont do what the nurse and the doctor asked her to do, thus her yearly check up went up in thin air
- a day before she's got her 'paw' marks all over the dough of her birthday cake and the muffin
- the night before she dont want to go to bed and refused to be washed, crying her eyes out
- this morning she cut-off a bigger part of her hair

- a month before she became confident on water, she would even go diving without her floats; too adventurous
- she showed us that she could speak in both Deustch and English; and some spatters of Tagalog, too
- she could already recognize her name and could even write it down when she's got something to look into
- she loves praying the rosary although she tend to choose the beads to pray on

- loves her raw veggies - tomatoes, carrots, bell pepper, salad
- enjoys playing with dolls, Barbies and her Bobby car
- too stubborn for her own good (or is it for our own good, hahaha)
- loves artworks, crafts and her books
- loves to play with the small Lea and the big Lea (her classmates in kindergarten)

The traditional birthday table's been prepared - where all the gifts and the birthday cake's displayed; the balloons and the decors' been plastered the night before. IC woke up at 8:20 am
and we sang the birthday song, she was shy but her eyes sought the stuff toys waiting in attention. Thus, finding her first suprise for the day. MC's got a little birthday, too, receiving a smaller stuff toy :D

And then MC had to go to the toilet, thus discovering the surprises displayed around the house. She urged IC to go with her, and so we marched down. Still wearing pajamas, IC blew the candle and opened her gifts. And started playing with her new toys.

The whole day was spent preparing for her birthday dinner with the family. The girls got busy making more artworks for the dinner table. Opa called saying that Oma is sick, she cannot come. But Opa came by to bring more gifts to the girls. Tante Ingrid, Uncle Ossi and Nadine came for dinner which, as requested by IC, composed of different pizzas (broccoli pizza, salmon pizza and salami pizza) and salad; with waffles topped with ice cream for desert. Jasmine, IC's cousin and godmother, called her up with warm greetings and some stories. 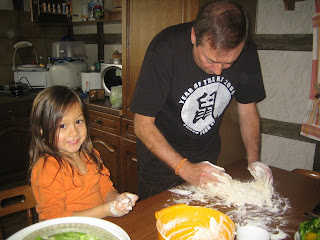 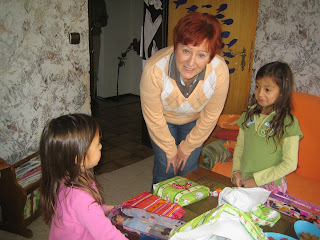 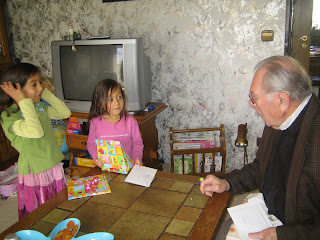 It was a good day and IC agreed as she said 'heute ist ganz schoen' (today is great).

thanks, vk! and oops, sayang malayo ka, meron sana akong babysitter, hahaha, but thanks for the thought!