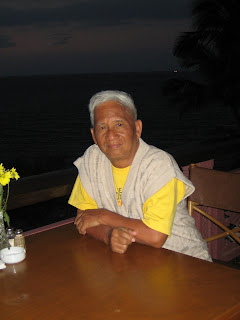 Today is my father's 71st birthday. In the Philippines, we call our father 'tatay' instead of papa or daddy. And my kids call him tatay, too, because we were all used to calling him tatay. In fact, his four grandkids from the sister are calling him 'tatay', too. I wonder now if he miss being called 'lolo' or grandpa.

Well, this would be a long distance celebration for us. He would be celebrating in the Philippines with my brothers and sisters and his grandkids. We wanted to greet him over the phone, but nobody was answering. Anyway, I hope he got to read this because we wanted him to know that we remember him; just that the modern way of communicating wont let us through. 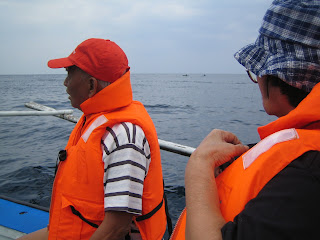 I have already asked pa naman the kids to sing 'Happy Birthday' as heartily as they could. And of course, the goodbyes peppered with 'I love you's' - I guess everybody's busy and a big party is going on that is why they couldnt hear us. But of course, we'll try to call again tomorrow. The time difference doesnt help as it would be too late to be calling; knowing that Tatay loves to hit the sack early :D 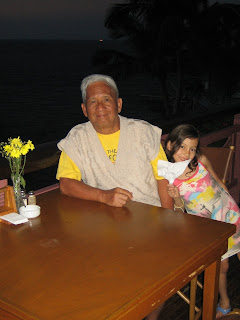 In our last vacation in the Philippines, MC remembers him as someone who would not let her go alone in the sea. She said Tatay always warn her not to go too far.

And IC? He recalls him as someone who would always be there, watching over them.

Oh yes, he is a shadow that follows the kids whenever they go. He wouldnt let them out of his sight for fear that something would happen. Even though the whole family are nearby. I dont recall him being such when we were kids. I know that his got adventurous spirit, too - but I guess not when it comes to his grandkids and maybe age does that, tempers down our wild dances.

But he is as always, a deeply religious man and he is always there to help others, even strangers. A big heart, that's what he's got. A sweet tooth, though this is something that he is trying hard to avoid as he's now diabetic. And I really hope he's working strictly on his diet :D

Belated Happy Birthday to your Tatay Raggold ! Wishing him more good health and inner strength all year round !

hi haze and liza - thanks a lot!

my dad's diabetic too, keeps on sneaking out sweets. maybe he is also tired of me reminding him on his diet.