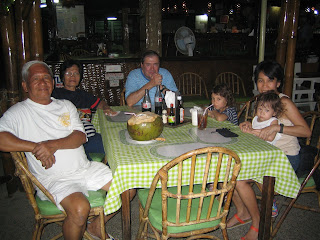 Photo: In La Union with Nanay and Tatay

I am fair. After an oma and opa story, it is best to come up with a nanay and tatay blog, too.

I know, lolo at lola, we call them in Tagalog. But since they considered themselves too young to be called such (my younger sister presented them with their first apo when they were in their late 40s), their apo's just got stuck calling them nanay at tatay, too. I wonder if they now missed being called lolo at lola, huh?

Tatay just turned 70 and nanay is in her mid 60s. Both have had health challenges behind them. And we are robustly rallying behind them. Meaning, now they are taking good care of themselves, supposedly.

Late in his years, we discovered that my father is diabetic. Runs not in our family, mind you. But if the oma have sweet tooth, my father have sweeter tooth. He cannot finish his meal without a sweet dessert. Talagang maghahanap. I cannot attest if this is true, but I heard that he would even ask the apo's for the half of their portion. Funny, but knowing tatay, there could be truth in that. Baka nga he would take it all for himself pa e. (Love you, tatay) He managed to kick his sweet tooth, slowly, and hopefully, surely! He's living on a diet now. I cannot say 'strict' diet' though.

He is also suffer from something or the other. But his steady supply of medicines are helping. Some even coming from so far away as Germany. His regular visits to the doctors are also a boon for him. Oh no, he is not sickly as you would think. He's got energy to jog in the morning pa nga e. And he would be our 'runner' in the family when there's nobody to do errands. He has enough goodie juice flowing in his oldie. That is because, he has his sense of humor in tact. No matter what! A corny joke is always ready to be blurted out. When his joke get laughter in response, his most famous reply would be 'At least masaya tayo, kahit mahirap lang tayo!' (At least we are happy, even though we are poor!') But he is a strict believer in keeping your word. Honor is tops for him.

That's my dad, the gentleman joker.

I consider my nanay as the real head of the household. She's a strong one. Something that does not really show in her personality, but she is. She is stronger in her silence. Because you know that she would be there for you. To listen. She's a good sport, too. She knows when to be a mom, a lola. Like oma, she's another wizzard in the kitchen. I wont compete with her cooking. And she's a great seamstress. She can do magic in her sewing machine. She's a tender lola to her apo's and a steady hand to her children.

About three years ago, she went underwent a difficult surgery. She said she is now celebrating two birthdays. Her real one and the day when she almost left us because of aneurysm. She was in the hospital for a few weeks, banging for life. On their way to the hospital on that fateful day, she still managed to utter words pertaining to the wellfare of her youngest son.

And from the stories I heard about this day, she was really a fighter. Although already so weak, in pain and almost gone, she resisted the doctors and nurses who wanted to plug her into all those machines in the hospital. And during her recovery period, she missed all of her therapy sessions. Never attended one of them at all. Even the doctors where amazed. I dont know where she got her energy, really! Her need for laughter could have helped.

Or maybe, I know. And it goes for both of them.

My parents have both their strong faith in God. They are regulars not only during Sunday services but also on religious and special occasions. And they are really practicing Christians.

They are both very generous. Kahit wala na, bigay pa rin. (Even if there's nothing to give, they would still try to give something away).

Loving and nurturing parents. It was later in life that they both managed to be more vocal and demonstrative about it. Still, we knew with their words and actions, just the same.

Maraming salamat, Nanay at Tatay! We love you both!
Posted by raqgold at 31.5.07