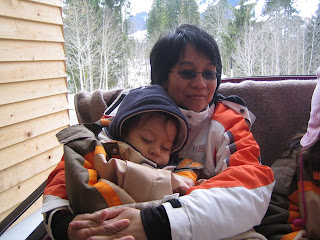 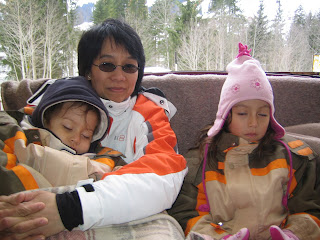 (Photo: 1 - Sleeping Beauty in my arms 2 Michaela getting shut eyes, too?)

You may not believe it but it's true. Isabela can walk and talk while sleeping. Plus, she can sleep with both eyes open. And snore in rhytmn, too.

Nope, not the simple case of somnabulism.

We have already established that she can sleep with both eyes open. And we can give evidence to this because as already said, she is snoring while doing this.

But the fact that she can talk and walk, too??? Hmm, it happened during our vacation in Austria early this year. As with most kids, playing and fresh air and good food and loads of new things and places to discover -- these would equal to being tired and of course, bedtime.

Since we have an appointment to go with for a sled ride, we have no choice but to move along. It is a 15 min walk from our rented apartment. We need to go down from our mountain hideaway down to the sled ride. But the kids enjoyed it because they can play and throw snowballs at each along the way.

Then, in the middle of our trek down, I noticed Isabela's head lolling. And I asked her, Isabela, are you sleeping? She smiled at me and said, No. Although I am a bit doubtful, we continued. She even managed to chat a bit with her sister. And throw a word or two of encouragement because at this time, I am running a race with her sister.

After 5 more mins of walking, her Papa decided to really look at her because as he said, Isabela seems to be just nodding heavily while walking. And there and then we found out -- she's already deep in sleep. And, snoring with gusto!

We had a good laugh with this. Papa had to carry her until we reached the meeting place for sled ride. And we had a good trip. Despite the rough ride, Isabela slept. She missed half of it!

Might as well, as she already made her own adventure.