We really hoped that winter would not last for a long time, and boy, did we have luck during the traditional Sommertagsumzug or the Summer's Day Parade. It was not raining and the sun was shining. 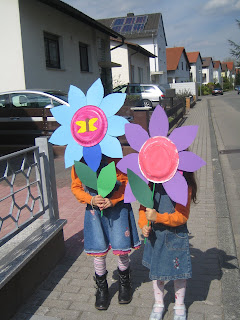 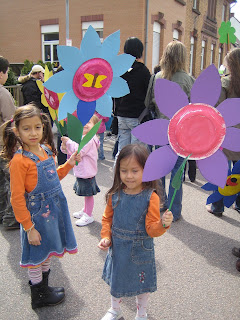 What is Sommertagsumzug? It is a day where the people from the different cities of Germany go out with a colorful parade participated by the different clubs and schools and kindergartens, etc; where everybody prepares their own summer floats or themes or costumes -- to greet the coming of summer and say goodbye to winter appropriately symbolized by burning an image of the snowman.

Our city celebrated their Sommertagsumzug with a parade from the different kindergarten. MC and IC; as well as their whole kindergarten walked around with big colorful flowers on their hands. The other kindergarten, five in all, carried their own symbol of summer on their hands.

Of course, songs that pertain to this traditions, were sung during the parade; and the assemble in front of the city hall (which used to a castle) were delighted to watch one kindergarten group
dance.

The firemen where there, which elicited more wonder to the kids. And then the highlight of the parade, the burning of the snowman. The kids oohhed and ahhheed; although most of the small ones where a little sad that the beautiful snowman had to be burned. We had to explain to them that it only symbolizes that summer is coming. 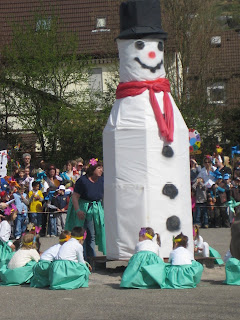 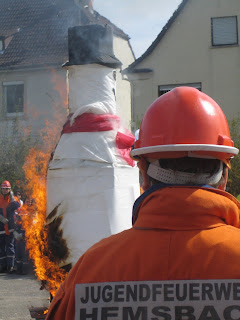 Oh, that feeling of sadness they immediately forgot when it was announced that the kids would be getting their pretzels as soon as the snowman stopped burning. Well, they got their pretzels, they got to play around and then, home! 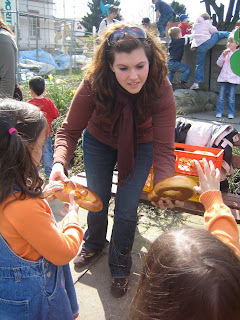 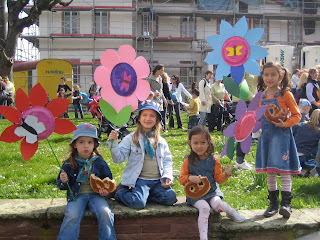 And then it snowed the next day! How do you explain that to the kids :D
---

It's a lovely and colorful parade. It must be a well anticipated event especially by the kids. The burning of the snowman is very interesting.

That's what we're getting in Colorado- beautiful, warm one day and then, snow and chilly the next. Loving the warm days, hating the cold...

rach - the burning of the snowman is the highlight though it is sometimes traumatic to the small ones. let's have pretzels in our next EB :D my hubby is prepared to bake it.

marysmom - this changing weather is making me crazy, too. the kids simply want to go back home to manila.

bye n regards to all