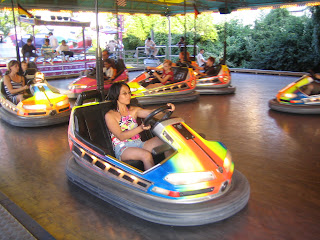 I have always pushed my husband to let the kids enjoy the bump cars everytime we visit amusement parks. He would always refuse saying the kids were still too small to enjoy such wild rides. That it is still too dangerous for them. With those arguments, I didnt say anything. But I hoped that soon, he would give in.

Then early this year, he consented. At first I thought he would only allow MC to join him; IC was already in tears, screaming for a ride. She only calmed down when Papa showed her that he actually bought 4 chips; two rides for each kids. Then I saw how IC got almost swallowed by the bump car seat, I almost changed my mind. I wanted to keep her off the driving platform, away from those bump cars. MC surprisingly enjoyed the ride, though she normally cowers from such wild plays. But with IC, I was having second thoughts. I watched and cheered as papa tried to evade the wild boys on the ramp; papa had IC tightly with his free arm. But I heaved a loud sigh of relief when it was over.

After that, everybody's happy. The kids cant contain their excitement over their rides. But me? What about me? It was while cheering and applauding my husband's maneuvers that I realized, I wanted to ride the bump car. I wanted to drive, too. Did I really think that pushing my husband to enjoy the rides with the kids would also satisfy my childhood craziness over bump cars? Yes, I confess. I used to be a bump car addict. I mean, I am still a bump car addict.

After denying myself of the enjoyment of bump car rides, I finally got to ride one yesterday. Nope, I didnt let on to my husband about my addiction. It was because MC didnt want to use her chip; she observed on the sideline how IC's smiling face suddenly turned pale when the wild boys rammed straight into their car. No more bump rides for her. As for IC, she revealed to me that she got frightened, but she wont admit that to her papa.

Papa then gave the chip to me. I can ride. I am so excited, I almost danced with joy. I got a car despite MC protesting screams -- she's also afraid for me. My husband wanted to stop me, but I deliberately stepped on the pedal. No one can stop me now. I am now one of the wild boys, vroom! I wanted to shout -- watch out for this Filipina on a bump car :-)

Whew, that was exhilarating! I wanted to beg for another chip, but the kids were taking me away from the bump car's area. Dragging me, actually. I let myself be dragged. It's ok, the next town's celebrating their city fair next weekend. And I am pretty sure, the bump cars would be there. I'll make sure that I would have my own chips on that day, too!

Oh childhood, my childhood!
Posted by raqgold at 7.8.07

Hi Raquel!! I love bump cars. We were at an amusement park a few months back and I just had to ride. Kahit mag-isa lang akong ikot ng ikot duon, ok lang. Nobody wanted to join me..sniff

It really brings back childhood memories :)

You look like kid if I am not enlarge the picture.

khun benjawan -- i felt like a kid when that photo was taken, hahaha!

I love bump cars too but my son hasn't tried it yet. I'm afraid he might get hurt during the ride.

Glad you had fun with the family that day.

Haha, you look like a woman in complete control in that picture. Bump cars are so much fun!

good thing you persevered in asking your hubby huh? i also loved to ride the bump cars, but i haven't ridden one in such a looong time. now, seeing your pic, inggit ako... =)