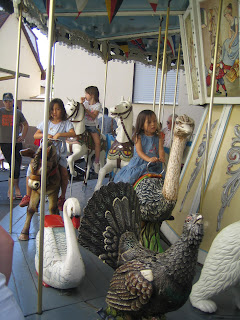 I can still hear the ominous 'thud' as the little boy sitting on a horse beside IC on the carousel ride fell. It happened just this afternooon.

He fell right in front of me and my husband, but it was another mom who got to him first. It was the shock, plus the authoritative tone of my husband that stopped me in track. But the other mom had the boy on her arms and I was craddling his hand when my hubby told me why he wanted us not to pick him up -- it seemed that the little boy fainted for a few seconds. If the fall was bad, it would have been better to let him lie down until we would know for sure. The lady who had the boy gave him hurriedly to my husband after hearing his observation.

I saw bruises on his forehead and then finally heard him cry. Boy, am I glad to hear him cry.

Despite the crowd around the carousel, only a few people witnessed the accident. The carousel continued to go around, at least twice -- even the family of the little boy didnt notice that he was not sitting on the horse anymore.

I told my husband to go to the mom of the little boy and tell her that the boy was unconscious for a time. Then she hurried off, I guess to the closest Red Cross van within the carnival area. The papa had to stay with the other siblings within the carnival area. I dont know. Maybe they dont want to disappoint the other kids for the fun carnival; or maybe they dont know how hurt the boy was, never seeing how bad he fell; but if it were us -- we would have all gone straight to the hospital. We could explain to the other kids what happened -- your little brother hurt himself on the carousel ride and we must know what happened to know first. When he is okay, tgen we can go back to the carnival or if the brother is badly hurt, then they maybe must stay home and go another time. I mean, kids would understand these things more than we know. First things, first!

My husband was telling me that it appeared that the mama and the boy were alone; simply because the mama was carrying the boy away alone. Whatever is the truth, I am just being opinionated because this is traumatic for me as a parent, too. That boy was thrown out of the supposed to be safe carousel ride!

We were ready to go home that time. The last carousel chip used. I was running behind the mom of the little boy, hoping to catch the Red Cross station which was supposed to be always nearby. I pray that the little boy is okay.

Then we stopped at the ice cream parlor with the kids. But I cannot enjoy my ice cream because I kept hearing the 'thud', seeing the little boy falling, seeing him laying helpless on the ground -- and the carousel going around and around. And knowing that he was sitting beside IC. What if he was mine?

I am afraid and a bit shaken. Seeing how casual the family of the little boy reacted, how the operator of the carousel unknowing, continued to lead the carousel to dance; and how he and his assistant never even bothered to talk to the injured party! I mean, how callous can you get? With the carousel, children is his business, his livelihood -- would he take time to stop the carousel and check what happened? No. If he was thinking of the profit of missing one round of carousel, shame on him. If he didnt see what happened, that's no excuse. His assistant could have told him, he was on his toes, curious about the gasps on the other side of the carousel. He could have told his boss! But no. No reaction from him, too.

Let me see. If the excuse would be they both didnt see what happened, then they should learn from this experience. Since there are only two people manning the carousel ride for children -- they should be aware that accidents can happen. Then one can stay on the booth selling the tickets, and the other one can stay on the other side of the booth to watch the kids on the carousel. A little vigilance. Cant they not do that?

Arrgh -- I am panicking because I also saw IC experimenting while on carousel rides. She would refuse to hold on, she would even hold out her hands and pretent like she's flying, and then a few minutes before that 'fatal' ride -- she was twisting and turning on her sit, without holding on.

It seemed the kids missed what happened. I am glad they did not saw it. But we explained to them what happened, and what we expect from them on their next carousel rides. It was bad enough to continue hearing that 'thud'; I wanted to purge that out by blogging about it and offering some tips.

Now let me share to you some precautionary measures while on a carousel ride:

First and foremost, when the carousel is something new to us, we let the kids observe with us the motion of the ride. We wanted them to see and to know what would happen. We dont want to be left with unused chips or tickets when it turned out to be a wild ride for the kids.

Go for the carousel rides that have the whole carriage moving on a platform. We have always been cautious about this particular carousel where the disaster occurred. All the seats on this one are hanging; and not on a firm platform. What if a kid suddenly refused to sit still? That kid would find no foothold, fall down or worse, dragged by the next seats -- I dont want to imagine the chaos! At least with the other type, with all rides on a platform, the kid could still be asked to wait until someone could jump into the platform to calm the boy/girl down.

Dont leave them alone on a carousel ride until they reach an appropriate age. Although the kids were already enthusiastic carousel riders as babies (they were on one at 6 months old), on those earlier rides, my husband or the opa is always with them. I cannot take these merry go rounds anymore, thought I used to enjoy them as a kid; one ride and I'm kaputt!

The kids were at least 3 years old when we allowed them to ride alone. That was because they only ride the same three or four carousel types over and over again. They are familiar already with the seats and the motion of the said carousel rides. I dont know if I am right, but I am guessing that the kid who had the accident was only a little more than 2 years old. He was too small and can only babble in short baby talks when I heard him. (I really hope he's ok!)

And almost always, we persuade the kids to choose the rides within the inner carriage. Or preferably on those seats where they could comfortably hold on, sit right and have a firm foothold.

We assist them before and after the ride. We always tell them to stay seated until the carousel is on a full stop. That they should ignore those kids that are already standing up around them, while the carousel is still moving.

They must always firmly hold on. On the belts, on the rods, on the grips -- they should make sure that they are holdin on to something before and after the ride. Therefore, they must give up whatever they are have on their hands -- balloons, candies, bags, etc. They would be needing both hands for the ride.

This is important: never tickle, give 'give me fives', or do something that would distract them from their carousel rides. I used to do those things, but then I noticed they would get so excited and would tend to anticipate my moves. Thus, instead of concentrating on holding on, they would be moving irregularly, sometimes sliding away from their seat. A recipe for disaster.

You might have to sacrifice something for this advice because this could be the most important one. Ask them to refrain from waving. Yes, no more waving. I know, that's the most normal thing to do while watching the kids on a ride, right? But how can they hold on with both hands when they are waving? A smile is automatic while we waive. Then just smile and nod your head, try to stop your hands from waving. And ask your kids to do the same because it is for their safety after all.

There was a newspaper article a few years ago. A little girl fell from a carousel ride and died, the trauma on her head was too much. What happened? That little girl, apparently, went too wild while waving to her parents while on the carousel. She lost her hold on the seat and that's that. A freak accident but it happened!

Let's enjoy the carousel rides but please take precautionary measures to avoid a disaster. We wanted to have fun after all!
Posted by raqgold at 11.8.07

Wow! cute naman! Thanks for the carousel ride tips. I have yet to take my daughter to one of those rides one of these days. It will come in handy.

lessons indeed from a carousel ride. of course, parents are still the responsible people in case of accidents, unless accidents are caused by technical reasons.

parents should know when and when not to let their child ride alone. children can be volatile, as you said, they want to experiment. am glad your IC is safe, and i just hope the other boy didn't have complications.

Scary! Kami we still accompany our kids. It's safer that way :)