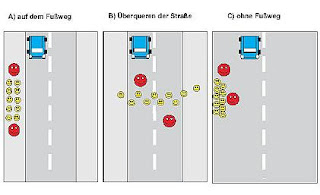 Photo: This is the standard behavioral pattern when facing the road traffic for the Walking Bus. The red dots are the volunteers, and the yellow dots represents the children. The image is from the Paderborn Cityportal.

My husband, as the president of the parent's council in kindergarten, met with the other kindergarten parent council officers a few months back. This was the first time that the whole kindergarten parents' council have held a meeting like this. Most were represented, only one kindergaten commuity missed the meeting. She said she got the invitation late and cant find a babysitter for that day anymore. At least, she called to inform my husband. The interest is there, right?

There are five kindergarten in our city with a population of more than 12,000. More than 10 participants talked about the programs in the different kindergartens, compared experiences, listed program successes and failures, dabbled on suggestions and future projects, and focused on the pre-schoolers.

The program for pre-schoolers. This is one point of urgency because most of these 5-7 year olds would be starting the school year walking alone -- going to school and back home. The lucky ones would have someone to walk with -- one who lives along the same street or within the area -- some would even be driven to school. But what about the rest of the pre-schoolers?

Statistics showed that a lot of accidents happen during the first few days of school. And this is the precise reason why the group of kindergarten parent's council wanted do something to prevent this.

The fact is, most of the parents 'push' their kids to practice walking alone to and from kindergarten, before their year as a pre-schooler ended. I have no argument with that. That is, if they live not far away from kindergarten; if they wont be crossing a major busy intersection; if they are walking with in groups; if they are not my child. I would rather be safe than sorry. I think that at a young age of 6-7 years old, the kids would still be needing our guidance; esp in crossing the street and in bringing them safely to school.

I have observed those pre-schoolers walking alone. They are still so playful. They could easily be distracted by a piece of something on the street. They would wave and talk to someone on the other side of the street, oblivious of the passing traffic. They would even run, following their leader - without carefully looking before crossing the street. Uh-oh, nope. It is too risky. They still lack the concentration needed to be left alone. Their decision-making ability with regards to the passing traffic is not yet there. Here is what they know: when they see a car coming their way, they automatically think that the driver of that car can also see them. But we as adults know that that is not always the case.

Now the parent's council group is closely looking for a school traffic guide. But there was a better suggestion, the Walking Bus. The Walking Bus is a safe way to take children to and from school. Parents act as 'drivers' and 'conductors' as the kids walk in crocodile fashion. Good for the children, their health and the environment. This was first introduced in London and is now being successfully introduced in Germany.

Here is what they say: 'Concerned at the growing ranks of obese children, a sports professor has come up with an unusual solution to prevent tubbiness. In the German town of Paderborn, primary school kids take the "Walking Bus" to class.' Read more here.

MC would be a pre-schooler this coming school year. She would be one of those who would be walking to school. She'll be walking with me, of course. But I would be glad to volunteer for this Walking Bus; for both health and safety reasons. I hope this would be realized.