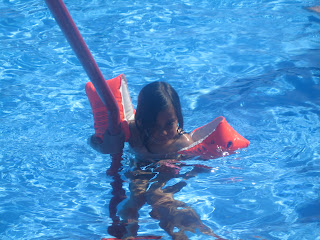 MC was supposed to start her swimming lesson this week; it would be a two week course. MC knows about this activity, in fact, she's looking forward to it, or are we wrong? She loves the water; and we are avid pool visitors, choosing neither summer or winter. She even swims with her papa in the deep end, with her water wings, unafraid. A few days before the course, we were in the pool and she was even playing in the wading pool without her wings, the first time that she's confident enough to do so. Thinking she's eager to learn, we never gave any thought about it. After all, it would also be for safety reasons as most of our holidays were spent around water -- beach or pool.

That particular Monday didnt start good: it was windy and was only around 19 degrees. But when the sun shines, it was warm. When we arrived at the pool area, there were already 8 kids. The instructor introduced himself and asked the kids to join him on the public shower, the first basic lesson to warm up. MC wont move, I had to walk with her to the group. Then she refused to get wet and started crying. My husband took over, the deal was papa can join her in the pool when she wanted. What happened was, she didnt leave papa's arms the whole time. She wont join, period. Even during an exercise break, it was really cold their lips were blue -- she sat with them but papa had to stay real close. Then back again in the water, she begged the papa to carry her. Uh-oh, this is a very different scenario from what we were expecting.

The funny thing is that, another little boy was also making a full drama on the side. He also wont join the group; just kept on wailing and flailing. The mama of the little boy was a bit frazzled; she turned to all of us and said wryly, ' that little boy is the swimming instructor's son.' Boy, am I glad we are not the only one :-) I mean, that one is even the instructor's son! The little boy had to leave in tears with his mom as the whole group's being distracted. As for MC, she stayed calmly in papa's arms.

But after 15 mins, Papa was already getting irritated. He gestured that he wanted to go home. I came to him and reminded him that our kids almost always needed time to get used to something. They are just like that.

I understand him. I really thought MC would join without a fuss this time. Oh well, do I need to remind him about the judo class? We had to attend at least 5 consecutive sessions -- before we gave up. Although MC said she wanted to join, she didnt get on the floor. Uh, only once, but she came running back to me in tears after a few minutes; for reasons that only she can understand. She stated she wanted to watch first. Ok, we watched. But after 4 session of watching, MC simply wont join in. I joined her on the floor, cajoled, promised rewards, threatened, pushed -- nothing worked. In the end, I had to give in, it is not for her.

Then the gymnastics; since we started with mother and child gymnastics, joining was not a problem. But it took time before she voluntarily gave her hands during the greetings, she refused to sing and dance at first; and would do the exercises without letting go of my hands. It was an exercise in patience, those first few meetings. And every time we had to move her to another level, I must always be in the middle of the group joining most of the exercises. It would take at least 3-4 sessions before she would finally be comfortable enough to let me sit on the bench while she does her thing.

Then again in ballet, how many times did I force my already unresponsive limbs to gracefully float when she was starting the lessons. It took at least 3 session before I can finally escape and be allowed to stay outside the curtain!

How do we expect her to react to a swimming lesson? The instructor said he would inform us after three sessions if our child can stay or leave the group. I told my husband we can give MC another two days, but he was adamant that it would be too late, for then the other members would be way ahead of her. He is right, as they would be doing different exercises everyday.

I asked MC if she really wanted to join, she didnt say anything and just ignored me. Ok, not the time to talk to her about it. I wanted to give her time, hoping tomorrow would be better. I didnt sleep good that night because of this nagging thought.

The next day, I talked to MC again hours before the lesson. She finally told me she dont want to join because she's afraid. What can a mom do? She is not yet ready and that is that. I told my husband we might have to forget about the lesson. I expected he would be disappointed, he was more than that. He was really upset and ranted on 'when she's like that, what would happen to her as a pre schooler this year? She needs to be independent. Her behavior is not normal, it is worrying me, etc, etc!' Uh-oh, I didnt realize that papa's expectation was higher this time.

I had to tell him to stop and to calm down. After all, it is not our decision. We cannot force something to our kids. The kids would know when they are ready. We just have to wait. Be patient. Be there to support their decisions. Love them no matter what. Expectations be damned.

And the good father that he is, he cleared his mind from these unnecessary worries in a second and drove to the pool to declare that: MC is not yet ready, not at this time.

P.S. We spent the whole day in a water park today. MC was showing us the things that she learned from the first swimming lesson; even though she was supposed to be too upset to take notice! She was in the water without her swim wings, confident enough to dog paddle alone. Kids would decide for themselves, indeed!
Posted by raqgold at 1.8.07

I had the same scenario with my kids last summer when they had their first swimming lesson. The teacher just explained to me that, generally, all first-timers were like that. Especially if they happen to be very young. They really don't expect them to learn to be world-class swimmers right away. Just getting through the entire set of lessons and removing their fear of the water was enough. To tell you frankly, my kids didn't learn a damn thing from that class. But, they had fun and now going in the water is like second nature to them. I'm so looking forward to their next lesson next summer. Maybe then they'll learn something.

Hi Raq,
I'm sorry to hear that MC had a rough start with the swim lessons. Kids will grow and eventually they will want to learn. It's just that some kids are more "game" than others. My daughter had a set of twins for classmates at swim lessons and they were screaming and carrying on like they were being tortured last year, but this year they are doing very well. Just give them time. Some parents want to push because they want their kids to excel in everything and that's when it gets stressful for the whole family.

Sorry to hear about your daughter. Kids want to do things on their own time, sometimes I do it to my 3 yr old too. But learned to just let go and let her be. Your daughter may need time until she will get a hang of it. You are really right that we as parents have all these expectations from our kids. But you know we can't stress ourselves and the kids. They grow differently and that does not mean we are bad parents if they are not yet the person we want them to be.

This post reminded me of my childhood experience of K-class. I want to attend K-class but i want my mom with me inside the class or else I cry so loud that disturbs the whole class.

btw, thanks for the comment. Come by anytime. Can i link U up here?

cookie -- the important thing is, you said it right, they are having fun!

KK -- the kids would let us know when they are ready. as you said, give them time.

momoftwo -- thanks for the nice words.

arlene -- i have memories of not being game, too, as a child, haha! thanks for the link!