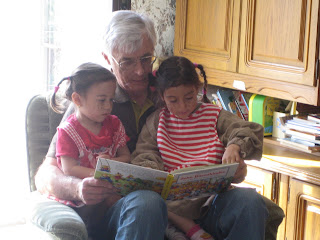 Photo: The kids with their uncle.

The kids witnessed an accident. We were in the garden having a barbecue party at my parent in law's house when their uncle bumped his head hard into a bird's house.

At first it seemed nothing, but after a few seconds, blood flowed. He was rushed into the kitchen by his daughter and wife. Leaving the kids outside, I told the kids to stay put for I wanted to know if they would need help. But I saw IC sneaking a peek so I decided to stay outside. I urged them to continue eating. Although IC ate half of her wurst, MC just dont want anything to do with food.

Then taking my hand, she pointed out to me the drops of blood that went from the garden into the kitchen. That's when I realized how it looks to the kids. That made me realize that this is really a big deal, witnessing an accident. Their uncle had to be brought to the hospital for treatment, but he was back after an hour.

Now, my kids always look forward to playing with their uncle. They simply cant get enough of him. But after the accident, they were a bit hesitant around him. So careful around him that they almost dont want to touch him. Noticing this, I explained to them that he is now feeling better. That there wont be any blood more flowing. That playing with him wont hurt him; although they should be a little careful with regards to his wound.

It was only then that they slowly 'thawed' and began circling him like bees again. But that was not the end of that. After the party, driving home, MC asked again what happened to her uncle. I simply told her that since her uncle is too tall and the bird's house placed so low -- the crash happened. I explained to her that it can also happen to them when playing under the table and chairs; or when running around a blind corner. The only solution is to slow down, to be aware of their sorroundings, and to be very careful.

I thought that would be the end of that? Nope. It was the topic for bedtime and they asked again and again, for two straight days. I simply repeated what I already told them. And repeated the warnings: to slow down, to be aware of their sorroundings, to be extra careful. Plus, we called their uncle to ask about his health -- am happy to report that he's feeling better now.
Posted by raqgold at 28.8.07

It's really difficult to remain calm when we witness blood flowing! when my daughter gets cut and they aren't serious, I would say "that's still far from your stomach and what you've eaten from lunch won't come out." Just like what my Mama said ;) .

Hi Racquel, I'm sure that was a scary sight for the kids. Now, they'll be more careful...Hope the Uncle is ok.

I can relate completely. When Adi had a nosebleed, Gaby was talking about it for a month!! Di naman siguro trauma but such vivid images really stay with children. Hope their uncle is ok na :)

KK -- i remember those words from my nanay's mouth, hehe.

rowena -- it was a bit of a shock for them. but it's also a lesson learned.

cookie -- your are right, vivid images! their uncle is better now.