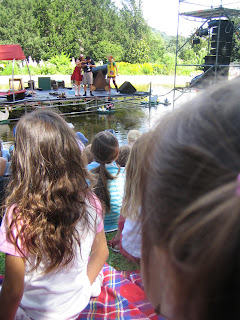 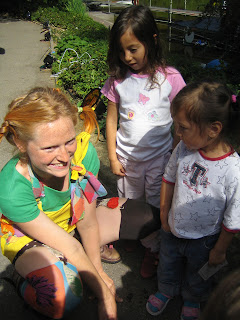 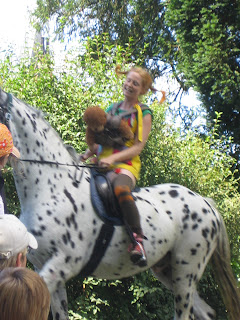 July 22, 2007 was the day that IC met Pippi Langstrumpf (Longstockings). A day that my little IC wont forget for a long, long time. (That is until she find another character to idolize, maybe.)

It was the day we watched Pippi in Taka-Tuka Land (Pippi in the Seven Seas) in Weinheim. The show was held on the park's pond to re-create Pippi's adventures in the sea.

On our way to the park, the kids's excitement bubbled up when they saw the Kleine Onkel (Little Man), Pippi's horse. It looks like Pippi's horse, which made me more excited for them.

Surveying the area for a better view of the show, we opted to use our picnic blanket, as did other families. In a few minutes the ground was covered with colorful blankets and jackets and kids and moms and dads. The kids got an unexpected glimpse of Pippi before the show. She was asked to check the sounds thus she had to go out into the open.

The crowd became one as they all chanted Pippi, Pippi, Pippi -- my little girl had to concentrate though. You wont hear anything from her. Watching her closely, one would think she found heaven right there and then. She just followed Pippi all over -- with her eyes. Like a dog to it's master, sans lolling tongue!

Pippi waved to the crowd and disappeared after a few minutes. Then the kids got restless, until they saw Pippi riding on her horse. Then it was only silence. There were snickers and laughters and shouts during the whole show; the kids are all having fun. They were all fascinated by the whole program. This is also my first time to watch a show in which they used the whole of the water area. They paddled with boats, jumped in the water, used the bridge to hide themselves, etc. I mean, I am sure the water is cold. Added to that is that that day was windy, too. Brrrr. But they are all professionals and they were great! They captured the imagination of the kids and the adults, too.

Plus, the show didnt take long; just long enough so it's worth our money and yet short enough so that the kids wont get bored. I am pretty sure the producers and writers of the show are moms, hehe!

The highlight of the show is the end, at least for my IC. Seeing Pippi walking alone after the show, the kids dragged the papa. They skipped the cordoned off part of the stage to meet with Pippi. I was left alone with the camera outside because the security tried to stop me. But I escaped by jumping over the fence ala super mom. Nobody can stop me: I need to take those photos!!

I'm just in time to click for posterity. My little IC, usually so shy to shake hands even with close friends, shook Pippi's hand while looking at her dreamily. And then before we lost our kids with the deluge of other small fans' -- we took off.

Papa later told IC, 'it's okay if you dont want to wash your hands for a few days.' Haha!

P.S. IC's godmother is now in Finland and they plan to drive to Sweden and visit Pippi's house in Vimmerby. We asked her to bring something from Pippi's house. I cant wait to see IC's face when the gift comes with Jaja. We are also thinking about going to Sweden just because of Vimmerby!
Posted by raqgold at 10.8.07

Wow! Your IC must be sooooo thrilled to see Pippi. Here horse is beautiful.

Ooh what an exciting day for IC!

Kapag pumunta kayo ng Sweden make sure to drop by Stockholm ha ;) there's an Astrid Lindgren park here and we can have a mini-EB too :D

christianne -- she's still talking about it like it was only yesterday! oh yeh, let's have EB in stockholm. how big is the astrid lindgren park there? malayo ba ang vimmerby from your place? dami kong tanong. na excited tuloy ako!

Raq, based on this pic it looks like a 3-hour drive (it's halfway between Stockholm and Göteborg, which is a 6-hour drive)

christianne -- ok, thanks for the info. di naman pala malayo. i dont think the kids would find it boring, i am sure they would love to stay all day in parks!!! i am secretly planning our trip, hehe!

Haha, does hubby read your blog? Baka Ireland naman ang gusto niyang bisitahin? If the girls are asked where they want to go, I think mananalo ka, hehe.