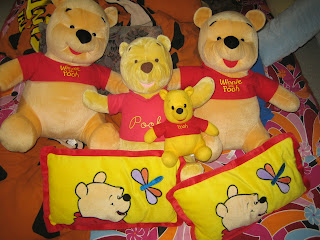 Look at the picture. Do you think IC would still have enough space in her bed to sleep?

She loves Winnie d Pooh. Right, second only to Pippi. Since Pippi stuffs are limited, then she gets to indulge with Pooh stuffs. And how!

These are just the Pooh things on her bed. Dig into her toy chests you'll find stamps, card games, musical Poohs, more stuffed Poohs, plus the whole assortment of Pooh friends -- Piglet, Rabbit, Eeyore, Tiger... It goes on and on and on.

MC gave up on Pooh things last year, that's why IC's Pooh collection doubled. And papa adores Pooh and his friends. He finds them so cute, he cant resist bringing them home as pasalubong for IC. And mama just had had enough of such things, I am planning to sell them one by one in eBay or donate them. I have to talk to IC about it. My first reason on asking her why she must say goodbye to some of her Pooh toys would be: it would be an exciting surprise to find a bed under those Pooh stuffs.

But we are keeping the books and the DVDs. The advantage of Pooh to the kids is that -- they dont care if they read/watch them in English or in Deutsch. I got English books and English DVDs for them. Thus, their knowledge of the English language is also being honed.
Posted by raqgold at 19.8.07

Besides English and Deutsch, do your daughters speak in Filipino too? My daughter is still learning Filipino as I am a lousy teacher when it comes to the Filipino language. I don't have much patience with it.

I like Winnie the Pooh way before I had kids. My daughter though never paid attention to. So I'm slowly introducing Winnie to my son.

KK -- they speak deutsch, can speak english though shy about it and knows a lot of tagalog words. IC calls her sister 'ATE,' for example.

momoftwo -- Pooh is cute. am doing the tag, thanks!

My kids love Tigger and Roo. Also the heffalump. One time Gaby asked me why WTP had no pants :)

cookie - IC also asked me to sew underwear for Pooh, hehe! am waiting when they would ask kung ano gender nya!

cuz, hubby says winnie the pooh and barney are both gays???

a lot of gay characters out there, eh.