Kid's Day at the Town Fiesta 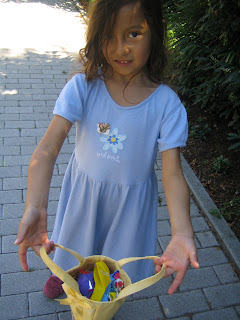 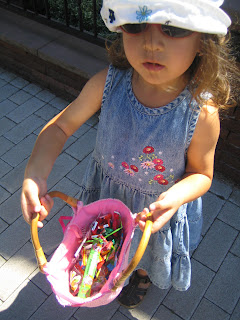 Photo: MC and IC showing off their sweet loots; getting their balloons. 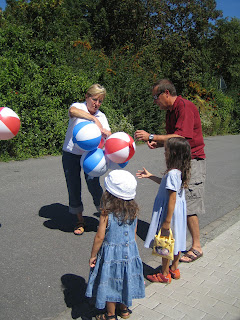 Sunday, August 5, is our 8th celebration of kid's day. There was nothing planned for today. We simply assumed that with the yearly tradition of visiting the kerwe or the town fiesta's amusement park for all of its four-day run, we would also be ending up doing our kid's day fun in the area. That we did. As a Filipina, fiestas' are always a big part of the family tradition and it is true also here in Germany.

The program for this day started off with a parade of 29 floats. The assembly point is in the school located one street away from our house. Thus, we arrived early enough to go around the waiting floats and bands and gawk a little. The kids, armed with their small bags for the much awaited shower of sweets during the parade, got an early start when a woman from one of the floats called to them to come nearer. She then proceeded to pack the kids' bags with a handful of sweets!

The girls who, left the house without much enthusiasm, had a calorie kick on seeing and smelling the sweets inside their bags. With twinkling eyes and eager feet, they skipped ahead to find the best place to catch and gather the promised sweets. When the band's music pierced the air and the parade marched on; they were already halfway into the street! We had to control their excitement but it was just too much -- too much goodies, too loud music, too much to see. In the middle of it were adults like me and my husband, also gleefully savoring the bursts of color and sound and the loaded generous hands.

Goodies for both adults and kids overflowed during the parade. There were small glasses filled with beer, wine, and some finger foods shared carefully to the gawkers and revellers. Sweets, balloons, card games, etc where handed out to the kids in full showers. I even got some shampoo, conditioner and lip gloss samples from the friseur's float! When the last float passed us, our hands and bags were so full, we had to go back home to unload them.

You would think the kids had enough. Nope. We met the parade on the way to the carnival area and we had to stop and do the same thing all over again. My husband was saying he is already half drunk from the mixture of all the free beer and wine! Well, he could always refuse, right? Like the papa who cant seem to get enough, the kids had their bags full again. Oh well, it's kid's day after all.

The kids enjoyed their carousel rides, their kiddie car rides, their bump car rides and they got to buy their choices of pretending-to-be-expensive-yet-really-cheap one-minute trinkets (I call them 'one-minute' because they would definitely be broken after a few minutes!). We let them splurge but with limit, they both got fiesta allowances from their uncle and aunt plus those from oma and opa. They know how much they got and they worked around on their specified amounts, too. It is a good introduction about how money works for both girls.

Then before five pm, we headed home. MC had a date with her godmother at 5 pm for another spin around the fiesta mile. She was already excitedly awaiting Nana's arrival. IC had to stay home as her godmother is on vacation in Finland, though she her fiesta allowance bulged for that. I love it when their godmother took time to be with them alone. Their time together is a real bonding time with the girls and their godmothers. My girls miss their bigger cousins cum godmothers more than I thought possible, since both of them left home to live a life away from home.

Left at home, IC took a tv watching break. My husband and I got to sip a few drinks and enjoyed a relaxing break; after I took care of the collected sweets by making them disappear from view and storing them up high out of their reach!

When MC come back, we walked to the Greek restaurant located in our street corner for dinner. It is after all the kids' favorite restaurant -- because of the play area with slides, seesaws, and sandbox; and the free ice cream they always get for dessert. A perfect ending for another perfect kid's day.

More images of the kids in action here.
Posted by raqgold at 8.8.07

Wow, so many treats everywhere. Sounds like a fun-filled event.