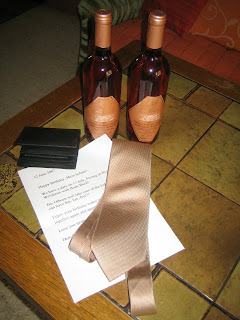 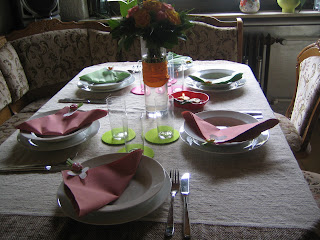 My husband turned 54 this week. As early as 7 am, the kids were up. We gave papa his gifts -- a wallet, a necktie, a gift certificate for a show ticket. Hmm, it is really not easy to find gifts for men, right? The first two came from the girls, and the last one, was for me. Thus, this would be a date to look forward to. I just hope I could still get tickets for that July night. I am crossing my fingers!

Our phone kept on ringing, starting at 8 am. I didnt want to touch it, as I know, it would be the birthday boy's exclusive property for this day. But I had to, because he was out with our daughter, MC , on her second day in the woods in the kindergarten.

I've decided to pack a box of homemade choco crinkles so he could celebrate a bit with the kids in the woords. A crinkles break. When they came home, the house was ready. And me too, coz I was able to finish somethings at home -- esp. to prepare for our his birthday dinner. Uh, I set up the table and baked more crinkles for dessert (this would then be topped with ice cream). I also did a bit tidying up, dusting and sorting out in the kids' room. The birthday boy would have to create his dinner - which was goulasch with pasta and green salad. A real German special.

My in laws came for an early dinner. It would always be early dinner when you have toddlers! They brought two wine bottles and his birthday cash.

I was teasing him if he felt different, one year older. He smiled and said, 'of course.' As he added, 'I feel big and old.' I just smiled and told him, 'well, you are not the only one.'
Posted by raqgold at 15.6.07

Belated happy birthday to your hubs!

Mahilig pala siya sa crinkles, hehe. Question: how do you bake with small children in the house? Annika is very intrigued by the oven, I'm afraid to turn it on when I'm alone with her.