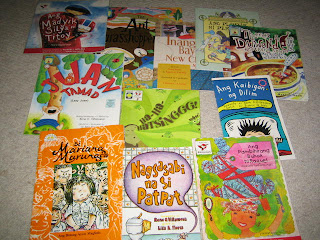 In learning Deutsch, trying to preserve my English, to recalling my Tagalog and to keeping a bit of Thai -- books were always there to help me.

As stated in my previous blog (Bi-lingual Kids on the Block), my eldest chose Deutsch but is keeping English at home. Though she's got some Tagalog words piled up somewhere in her brain. Meanwhile, my three year old is still like a sponge, ready to collect and accept all words thrown at and spoken to her. I wanted the kids to at least arm themselves with words from my beloved Philippines, thus, Tagalog books to the rescue.

When I was pregnant with my two kids, I was already reading aloud to them in all three languages (except Thai). Added to that, my listening music were then filled with all four languages. I loaded myself with more books, CDs, DVDs, etc. as the time moved on.

Since the kids are a bit lagging on their Tagalog, I decided to keep them interested using more books. And now, thanks to Tita Ani H. from Anvil, they have enough. We've been visiting the Philippines two times now. And everytime, Tita Ani's been ready with books for the kids. (Ehem, nagpaparinig!)

Oh, there is the famous Juan Tamad (Lazy Juan), Ang Langgam at ang Tipaklong (The Ant and the Grasshopper), etc. but the kids' favorites were 'Nagsasabi na si Patpat' (Patpat Says When to Go), 'Si Mariang Marungis' (Messy Maria), 'Ang Pambihirang Buhok ni Raquel' (Raquel's Fantastic Hair), 'Ha-Ha-Hatsing' , a story on why we catch a cold. Actually, there were more faves but at least three or four Tagalog books are in the car. Ready to be plucked out during a boring ride.

What I love most about these books are, they have English translations. The stories are not too long. They are not so thick, thus, you can carry them around (with a big mama bag, if you have one)! Of course, the colored illustrations are keeping the kids' interest high, too. The books are also an attrative trip back to childhood, for us moms and dads!

The publishers of the books include Hiyas, Adarna, Anvil, Tanglaw, Lampara, etc.
Posted by raqgold at 6.6.07

Cool, have saved the picture and will look for these books when we go home next year. Thanks!!!

my 6-year-old (almost 7 actually) daughter loves those books. she actually has a collection at home in her very own bookshelf. when i was in manila, she would always convince me to pass by National Bookstore to buy her a new book. she just started reading (i mean, not just word per word, but actually understanding the words she reads) and she just can't get enough of it. her enthusiasm with books amazes be because i myself am a book-lover.