Kids' Day in A Country Fair 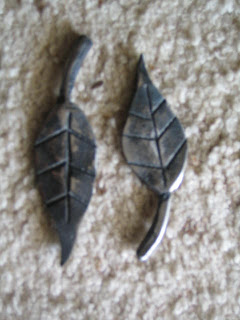 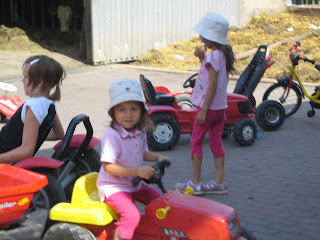 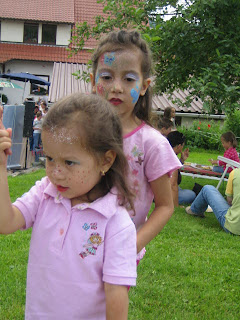 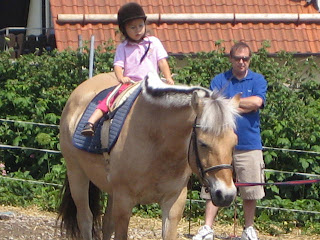 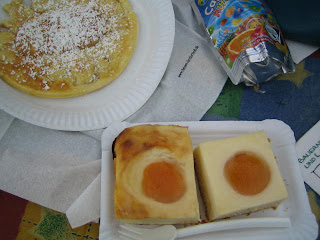 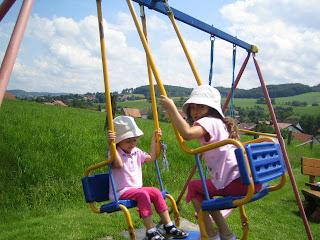 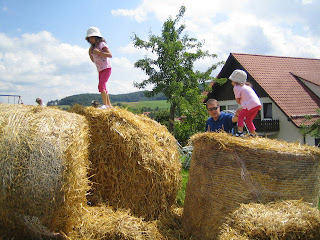 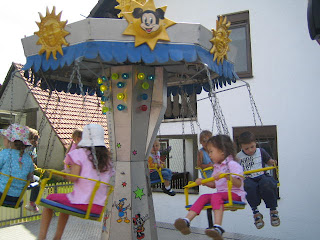 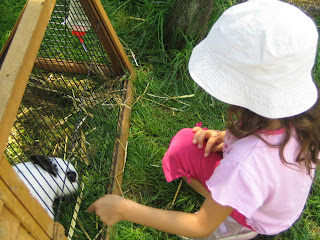 This month's Kids's day was a choice between swimming and a country fair.

But when the kids saw that horseback riding is one of the attractions at the fair, all's decided.

After a 35 mins drive to Odenwald, we reached Ferienhof Dingeldey. It is a vacation camp for families with small children, focusing on exposing them to farm living and fresh air, of course.

The kids wanted to take a look first. They skipped the cow stalls as they dont like the smell. My husband managed to stop me from checking the stalls selling souvenirs, books, farm products etc. The baby pigs must be cuddled. The rabbits poked. The calves oggled at. As we slowly reached the main fair, the kids cannot contain their excitement already. Me, too, as I can already smell the barbecue and the cakes, hmm.

We went inside the camp's apartment. When the kids saw the high bed, they simply declared 'we want to come here for a vacation.' Papa laughingly protested saying that it is simply too near.

They had the run of the playground. Swing, slides, trampolin, sandboxes, the haystack, carousel, mini tractors, etc. A quick stop in the make-up salon got them both made up faces. They were simply all over. That's why I got to find myself a nice cool spot under the tree, and even managed to snatch a garden chair, hah! Sayang that I forgot to bring a book!

For lunch we managed with waffles and cakes (on photo is one favorite - the sunny side up cake because it looks like one). We had a big breakfast. This would suffice until the crowd had their fill, with the long line, it would take more than 30 mins to get your food!

Then the highlight of the day, horseback riding. Another long line is starting, so my eldest run to be one of the first. The youngest wont, she said. But when she saw her sister enjoying it, she decided, she would, too. Papa balked at first, because of the long line, but today is kids' day after all. So, they waited for her turn.

Meanwhile, I gave up my lounging because I saw the blacksmith setting up his trade. It is a really fascinating art, which is already dying. It is sad because it is awesome to watch -- iron's supposed to be unbendable, but it is giving in to heat. And boy, how the blacksmith pounded until a shape was formed. Wow! The kids both got iron leaves, specially made for them on that day!

We missed lunch so we had an early barbecue dinner. With a farm-made ice cream for dessert, yum!
Posted by raqgold at 6.6.07

My, I thought Villa Kunterbunt looked fun but this is even more fun. Saya naman ng outings ninyo, it's great that there are so many places that cater to children's interests nowadays :)