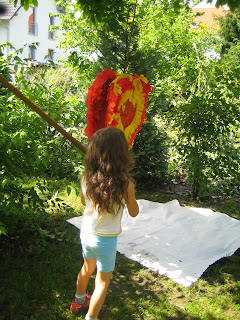 My kids were invited to a birthday party yesterday. And you know what, it is their first time to see and join in a piñata game. Oh, piñata is not well known here in Deutschland -- as it is in the US or in the Philippines (our version would be the 'pabitin' or the ceramic pot). The family of the birthday girl who are Austrians, used to live in the US, thus, thus, they are well versed in this tradition.

Wikipedia states that pinata is a brightly-colored paper container generally suspended on a rope from a tree branch or ceiling that is filled with candy and toys and is used during celebrations. A succession of blindfolded, stick-wielding children try to break the piñata in order to collect the candy and/or toys inside of it. It has been used for hundreds of years to celebrate special occasions such as birthdays and Christmas.

This time, since the girls are still too small (the birthday girl just turned 4) and there were only five participants, they agreed not to use a blindfold. The Deutsch workers in the compound (repairs were being done) were amazed and took time off to watch the game. The funny thing is, the family made the piñata so sturdy that the girls cannot even create a nick. The workers were already asking if it takes at least two days in America to finish the game!! Ha-ha! Thus, the birthday girl's papa to the rescue -- he had to give it at least 10 solid hits to disturb the packaging. And then the girls took turns and whoah -- the surprises rained on them.

That was the highlight of the party: Because the rest of the party games that were prepared, the little guests were not so excited to participate - either there would be cries of protests or sulking in one corner. Party food were cakes and two big Italian party pizza - salami and four cheese. The moms and dads got to enjoy dinner and some lively chat as the kids finally decided to play harmoniously together.

Anyway, it is also a rare kiddie party because the parents were allowed to stay -- with three families invited (one family didnt made it) -- not too crowded, then it's okay. In most of the children's party that my kids have attended, I usually just bring the kids to the door, chat a bit and confirm pick up time and then goodbye.

Oh well, it is not the Philippines after all. But sometimes, you just miss the crowd, huh.