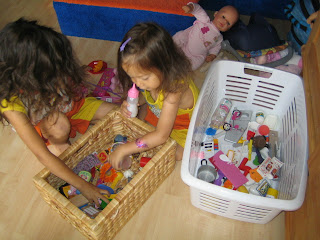 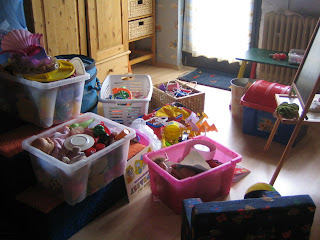 MC suddenly decided, that with cries and screams, she would have the rest of her Barbies back. How she remembers one or two Barbies from at least a dozen of Barbies, fails me. Basta! She pointed to one of the boxes on top of her cabinets, and said, 'you placed them there!' That stumped me really, I dont remember putting the Barbies in that particular box.

Then came the compromise - I told her to sort out their toys first, choose what's to remain and what to toss out; then I would either donate them, sell them in ebay or throw them away. Or else, the Barbies would stay in the box.

She opted to sort their toys, under the eyes of her little sister, IC. I gave them a laundry basket to put in the 'dont need' things. They started out with enthusiasm, tossing away most of the things that they saw in the first drawer. Even those that I think, they would actually hang on to.
But gradually, they refused to let the rest go. Maybe they got tired, it is after all, a big job. But then, they scrambled to rescue some things in the laundry basket, too.

'What's happening,' I asked them! 'Nothing', they said, it's just that they decided they wanted to keep everything after all.
Posted by raqgold at 24.6.07