Some Products I Believe In... 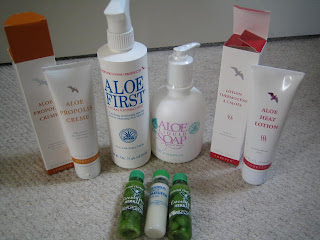 As the title said, these are some products that we really believe in. We tried them, and they are effective, really!

Notice that most of them are from Forever Living? That is due mainly to my youngest daughter's very sensitive skin. We started to see rashes developing on her chin, in both her hands esp on the wrists, when she was barely three months old. Those disappeared mainly because I used to dab breastmilk over them. But then later on, the rashes appeared behind her knees and on both elbows. And she started sratching until they bled. We tried nivea cream, bebe cream, all kinds of baby cream, but the breastmilk was still the winner.

We told her pedia about it. He said she could be having some case of eczema. He gave us loads of creams to try, some of which have steriods. It was ok, but though it helped a bit, the rashes kept coming back. And steroid is not good for a baby's tender skin.

Salt water is good, a lot of people say. So that summer, we drove 18 long hours to Spain, for the beach! Three weeks we stayed. Everyday on the beach. It did some good, but was not long lasting. Because she was still scratching, and bleeding from the open wounds.

My poor girl. We had to bind her wounds in the process. To discourage her from scratching them again and again. And at night she wore gloves. These are sterilized gloves from the pharmacy. To avoid more scratch wounds while sleeping. We did all the suggestions we saw in the internet and those from word of mouth. Dont bath her too much. If she do take a bath, we put two cups of see water salt in her bath water. (This helped a lot) At least 18 degrees in the bedroom when she is sleeping. No rough clothes nor blankets nor pillows, etc. on her. We dont use softener and we use only washing powders esp made for sensitive skin. Made sure to put cold compress over the wounds to cool. Every three days, I cut and file her nails. She dont get to eat chocos. Milk is no problem as she's getting only mom's milk. We were overloaded with lists on what to do, but she just kept on scratching.

Then a friend came over a few weeks after our vacation from Spain. She saw how my girl was suffering. That was July 2005, at 15 months old. That friend said, 'why dont you try Aloe Vera?'

My husband and I were very sceptic about it. I know aloe vera . We used to play with them as children, chopping and squeezing and cooking the sticky thing with our midget like kitchen gadgets. I know that my late lolo used to rub it in his already thinning hair. For what purpose, I dont really know.

Anyway, we wanted to try anything. For our little girl. What encouraged us was the fact that this is purely herbal.

A week after that visit, we drove an hour to to reach our friend who recommended aloe vera, the products from Forever Living.

She sprayed Aloe First on my daughter's wounds to sterilize them. When it was dry, she applied Aloe Propolis Creme. Our little girl didnt flinch. So I guess, this would be good. Then we added Aloe Liquid Soap on the list, too. These products were not cheap, too.

The instructions state: Apply liberally to the skin as needed to soothe and moisturize. Well, I did. I sprayed and applied, both the Aloe First and then the Aloe Propolis, at least 8 times during daytime, and every time she moved at night. Yes, she is sleeping with us. Because I am still breastfeeding her, and because I wanted to be able to stop her when she started scratching. And I missed loads of shut eyes during those times.

We used up dozens of tubes and many bottles of Aloe First, but it was worth it. The first Propolis tube was empty after 3 days. They were really effective. After one week, the wounds were healing. And she stopped scratching. What a relief!

Oh, at bath time, she used and is still using, Aloe Liquid Soap. During that time, bath time was two times a week, then I either wash her or she showers. She also drank Bits and Peaches as extra vitamin supplement. This is a peach flavored aloe vera gel, which supposedly helped stabilize her hormomes. She got to finish the two bottles we bought, and then she stopped. Ayaw na nya.

The Aloe Heat Lotion is a massage lotion. We uses it when we have a cough or a cold. Or to cure headaches and whatever aches. Not oily. A wonder, too.

Then we flew to the Philippines early 2006. We went to the beach for two weeks. The high percentage of salt in our sea water refreshed her skin. After a few days, you would not see any evidence that her skin had suffered. Magic sea water. Proudly, purely Philippines!

Of course, I still continue spraying and applying the cream. But not as often as before. I am just doing it to 'soothe and moisturize'!

This was a tested product by my nanay. Which she passed to us during her visit here in 2003. I dont know if both oils are working on their promises though. We only use them against cough and cold. We empty one small bottle in our warm bath water. Relax in the water for at least 5-10 minutes. And we feel better already, even the kids! Actually, our closest friends and relatives here in Germany are also using them. We hoard yearly supplies for everyone whenever we go home to visit.

keng, u know that i have sensitive skin too...kaya am a bit worried na i might pass it on to my coming Anya...i'll try the aloe vera products nga...but i hope i wouldn't need them sana (crossing my fingers!) san ba nakakabili ng miracle olive oil na yan???

oh, that miracle olive oil, you must order it from el shaddai foundation sa pinas.