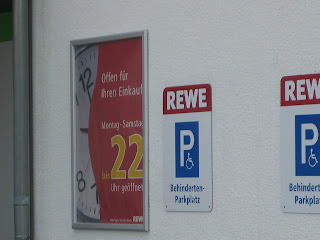 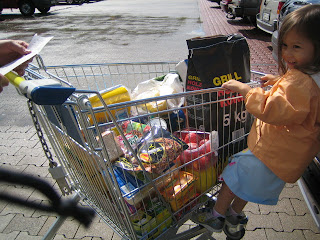 Not our usual day for doing the grocery, the late Saturday afternoon, but we must go. We skipped Friday because we had a full day. And we took off a bit later today because the house must be cleaned and it was raining cats and dogs.

Not surprisingly, the veggies and fruits were not so fresh anymore, and the stocks left something to be desired. Some shelves were already empty, too. But, the long lines were there --in both supermarkets where we usually buy our basic needs.

Let me tell you something, in Deutschland, the stores are open from Monday to Saturday usually from 8 to 8 pm. And now, some enterprising companies are extending the opening hours until 10 pm (see photo). I am waiting for them to open 24 hours, would it happen? I dont really know.

When I arrived here in 2001, the stores were open only until 6 pm on weekdays and until 2 pm on Saturdays. I usually get panicky-- especially for someone like me who's used to stores being open anytime of the day! I dont think in terms of closing times, but on impulse and needs. Culture shock talaga.

It gradually changed in the last 4-5 years. A welcome change. The closing time were extended. And in some special days, Sundays or Holidays meant, business as usual, too. Oh, throngs gathered whenever a special Sunday is announced -- a carnival atmosphere -- actually, a real carnival. The streets would be colorfully decorated, kiddie rides would appear in every corner, exotic stalls would emerge and the sound of music, the smell of food and clinks of drinks would cover the air. I love these special days, too, for it means, extended hours would be extended further.

In some areas, they are not so strict with the closing time anymore. But the rest of the country would have yet to follow.