Sunday Picks and a Festival 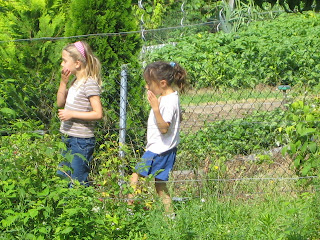 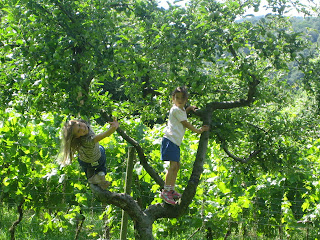 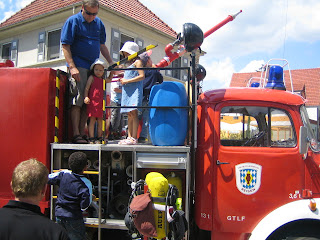 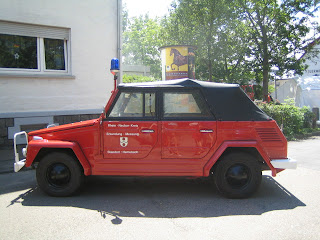 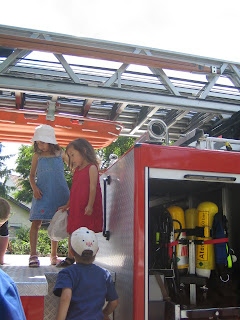 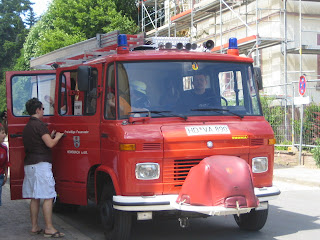 A Sunday morning. For a change, the sun is shining. Missing out on our cherry picking time yesterday due to another sudden burst of rain, we drove to our opa's veggie and fruit garden. We had to pick up MC's friend, E, who we promised to bring with.

Both girls run wild, hanging on trees, plucking the rest of the strawberries, climbing up and down the ladders, and just being monkeys! IC and I gathered most of the red and black currants. The papa is up on both cherry trees, trying to fill up a big basket. It is our family's turn to provide IC's kindergarten class their weekly supply of fruits/raw veggies. Practical choices -- cherries and currants -- because they are already there, ready to be plucked. And we did gather more than enough.

Everybody took a shower upon arriving home. It is simply to sticky and too hot, whew! Then we strolled over to join in our city's fire brigade summer night festival. Kids are not in a good mood. Too tired, maybe. Or too hungry. Whatever the reason, we almost didnt make it to the next corner as they both just wanted to be carried. I firmly said no, the papa gave in but with two kids -- how would he manage? Away na.

A few tears here. Shrieks and tantrums. Not a good start. But they managed to calm down a bit when I pointed out some snails and bugs along the way. They forgot being makulit.

But when they saw the big fire trucks, it almost started again. Just because MC wanted to stay on top of the fire trucks and papa had to go down as other kids wanted to have their turn, too. Hay...minsan kakabaliw talaga. Anyway, there are more fire trucks to see and to climb onto. Some rather old but well maintained, some real modern and so complicated (at least to me!) Then their paraphernalias for operations and fire drills were also on display - to be touched, to be examined, to be oggled at. Even their clothing cabinet are open for all to see. (I hope walang nawalan!)

They have a tent where they simulated the importance of a smoke detector. The kids dont want to go, me too, but I was pushed to go in. Oh well, what else, all smoke - cant see anything and it stinks! I almost went out coughing, nahiya lang ako :-)

My husband was at least convinced to buy and install them esp in the kids' room and the hallways. I used to tell him to buy one, but he kept on saying that's it's useless. Of course, I didnt say I told you so. Baka umatras pa e.

They have a water fountain using the firemen's water tubes. Most kids came home all wet, and some unsuspecting adults, too, who got in the way. At least there were no tempers.

At ang hindi mawawala -- beer, currywurst, french fries, cakes! We had to wait for at least 10 mins to get our cakes. We ordered three different cakes -- one for me, one for MC and one for IC. I only got a piece of my cake, both kids gobbled it all up. But their cakes? I got to eat the rest of their cakes, ano pa nga ba.

As is with most of the festivals here, there is a corner for kids. A coloring table filled with colored pens and papers; and a television set showing kiddie programs.

A big plus, kids can ride on a fire truck, touring the city for 15 mins. Oh, I joined the kids. It was an exciting ride, too. After all, sino sa atin makakapagsabi na nakapag joy ride na tayo sa fire trucks, huh? Me and my kids already had our turn!
Posted by raqgold at 17.6.07